If you expect reproducible outcome of an automation system, you not only need to make sure you have a specific version of the automation system itself, but also have fixed versions of all its dependencies. The most prominent Ansible dependency which can affect your plays would be Jinja2 but this applies to all involved components.

Silo not only removes moving parts by having 100% fixed dependencies hardcoded in a Docker image. It also enables you to switch Ansible to any version without affecting other users, therefore making it easy to test your playbooks and roles against new Ansible releases and run differing Ansible versions per playbook, project or user.

Furthermore you can bundle your playbooks (incl. configuration, roles, plugins etc) in a custom Docker image which inherits Silo and therefore generate a versioned, shippable, complete and self-contained executable package which runs your playbooks in any environment. (where you have access to a Docker daemon)

For convenience ansible-silo includes ansible-lint. Since ansible-lint uses the Ansible libraries it may react differently depending on the used Ansible version.

This recording is powered by asciinema player and demo-magic.

What problem does Silo solve?

If you expect reproducible outcome of an automation system, you not only need to make sure you have a specific version of the automation system itself, but also have fixed versions of all its dependencies. The most prominent Ansible dependency which can affect your plays would be Jinja2 but this applies to all involved components.

Silo not only removes moving parts by having 100% fixed dependencies hardcoded in a Docker image. It also enables you to switch Ansible to any version without affecting other users, therefore making it easy to test your playbooks and roles against new Ansible releases and run differing Ansible versions per playbook, project or user.

Silo bundles Ansible and all its dependencies in a Docker image.

To enable Ansible in the container to connect to remote hosts, your ~/.ssh folder is mounted and also, if available, your ssh auth socket (key forwarding) is mounted.

Starting the Silo container is a complex Docker command which needs to cover forwarding of environment variables and mounting required resources like the users ssh configuration. This complex command itself is included in the image and can be fetched by starting the container with the --run flag. The returned command then can be executed on the host which will start the container again with the correct parameters. 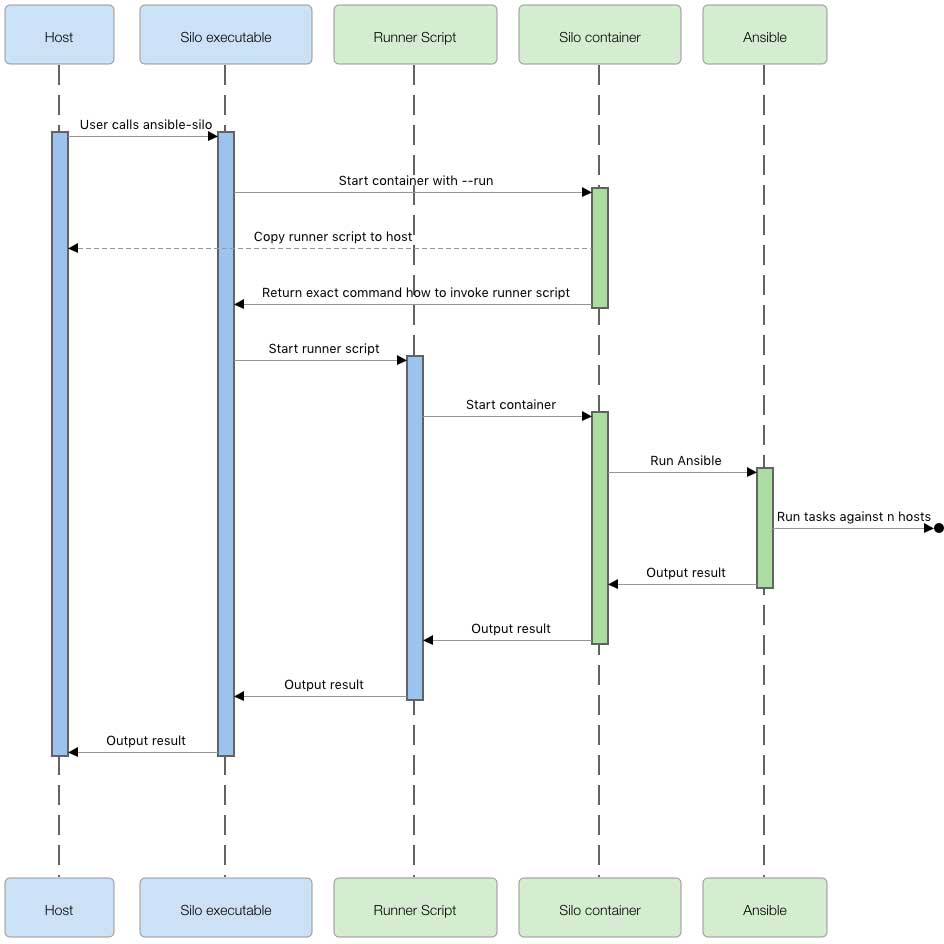 A bash script to easily trigger this process can automatically be installed by Silo when called with the --install flag.

The Silo container is not persistent, not running in the background. A new container is started for every Ansible call and is automatically removed after completion.

Standalone mode means you run Silo as a replacement for Ansible. By default Ansible is installed in a Docker volume. The volume can be changed, so you can have multiple volumes with different Ansible versions, e.g. per user, per environment or per playbook.

Playbooks will be mounted from the local file system and are not part of Silo.

In the bundle you can add your playbooks, roles, configuration and a specific Ansible version to the bundle.

A new bundle can easily be created by calling Silo with --bundle <bundle name> option.

Silo is based on Alpine Linux 3.6 and includes the following APK packages:

The following Python modules are installed via pip:

You need to be on a system where you have installed Docker (minimum version 1.9).

To install the ansible-silo executable along with Ansible replacements run:

This command mounts your ~/bin directory so Silo can place its executables there. Select any location you like but make sure it is in your $PATH.

To install ansibe-silo for all users you can mount /usr/local/bin:

Where the files/links are stored depends on which path you have mounted during the installation process (see above, e.g. $HOME/bin or /usr/local/bin).

You can use this command to delete all files and symlinks:

All versions of the ansible-silo images can be deleted per:

This also means you do not need to pull the latest version of the image to run a newer version of Ansible inside. You can run any Ansible version in any version of the Silo image.

To update the image run:

This will pull the latest image from the Docker registry and automatically tries to replace the ansible* executables. If these are not writable by your user you can write them to a different location and later move then with sudo.

Silo will by default run the latest installed version of itself. You also can run any other version of Silo by simply passing in the version:

The Docker command which gets executed for calling Ansible is stored inside the image itself, so it cannot be modified. To inject additional parameters into the command you can define functions in ./.ansible-silo, your ~/.ansible-silo or globally in /etc/ansible/ansible-silo/ansible-silo file matching the pattern silo_* or _silo_*. The runner script will execute all silo_* and _silo_* functions and append their output to the Docker command.

For instance, if you need to mount an additional volume, you can add a method like this to your ~/.ansible-silo file:

In Silo bundles you can add functions to the file bundle_extension.sh inside your bundle directory. To customize behavior per user or host, you also have the option to add functions to files matching the image name. If, for example, you run a bundle called foo-bar, Silo will search for the files ./.foo-bar, ~/.foo-bar and /etc/ansible/ansible-silo/foo-bar and append the output of all functions matching the pattern foo_bar_* to the Docker command.

You can install custom software in any Silo volume. The mountpoint for Silo volumes is /silo/userspace/.

Inside any volume you will have a lib and a bin directory.

pip is pre-configured to install packages into the volume:

Ansible Silo can be configured per bash environment variables. Variables will also be picked up from three files (bash):

For Silo bundles also the following files will be loaded:

This enables the user to define custom behavior per playbook location, per user and globally.

If defined, enables debug mode. In debug mode Silo will list all SILO_* env vars and the Docker command which is executed to start the Silo container.

Which will show something along these lines:

The base Docker command that will be executed. This simply defaults to docker.

Disables privileged mode. Consequently will not forward the Docker socket into the container and any interaction with Docker will not work.

Can be used to specify a custom location where Silo starter scripts will be installed during update.

If set to a valid Silo version, that specific version of Silo container will be started. This does not change the installed ansible-silo command. Most functionality though is inside the container and not the starter script.

--switch Switch to any Ansible version

The given version relates to any git tag or branch of the Ansible github repository. To switch to the development branch run:

Will reset (delete) a Silo volume.

The volume can be specified by environment variable SILO_VOLUME:

You can log into the running Silo container by calling Silo with the --shell option. This can be used to install custom software in a Silo volume.

All arguments after the --shell option will be directly executed.

You can run multiple Ansible versions in parallel by installing Ansible in different volumes. By default, Silo will use the volume silo.<username>, e.g. silo.some.user.

The name of the volume can be changed by passing the environment variable SILO_VOLUME. The volume name will be prepended with silo. and automatically be created if it does not exist. It will contain Ansible 2.4.2.0, the latest version as of writing this document. To change the Ansible version in that volume run the switch command:

If you want to run playbooks or access any other resources like inventory files, make sure you’re currently located in the directory of those files. You cannot access files outside of your current working directory since only this directory will be mounted in the Silo container.

If you installed the Ansible scripts you can use Ansible the exact same way you usually would. Just call ansible, ansible-playbook, etc.

Run a ping on all hosts

Run ansible-lint on a playbook:

By default, Silo forwards the Docker socket into the container to be able to run Ansible against other containers. This requires the Silo container to run in privileged mode. To disable this you can define the environment variable SILO_NO_PRIVILEGED.

Silo can also be used as foundation to package and distribute your playbooks as Docker images. You can create a new bundle by calling:

This will create all required files for building a custom Docker image based on Silo inside the newly created folder foo.

Store your playbooks, roles, inventory, ansible.cfg etc. inside foo/playbooks and then call the build script to create the Docker image.

The foo package also inherits most of Silos functionality. To install an executable for the bundle run:

Now you can simply call foo to run your playbooks.

All files inside foo can be modified by you. For instance you should define a specific Ansible version in the Dockerfile. Have a look at the generated README.md inside your package for detailed description of the contained files.

Why do I always have to enter my SSH key passphrase when Silo starts?

On OS X, forwarding of the SSH authentication socket currently is not possible. Therefore Silo cannot use your ssh agent, even though it is forwarded to the container. If you have a password protected SSH key, you need to enter it once after the container is started. Since Silo is not persistent you have to enter it on every Silo run.

If anything goes wrong, try to reset your Silo volume.

You can see the actual generated and executed docker run commands and all defined SILO_* environment vars by enabling debug mode.

Ansible Silo uses SemVer. Since Ansible Silo is the promise of a stable environment, we consider the smallest update of any contained dependency to be a potential breaking change and indicate such change by incrementing the major version number.

The ansible-silo image is an automated Docker build triggered by Travis CI, whenever a tag passed all tests. This means, to release a new version only a new tag in the form v1.2.3 needs to be released.

There are custom build hooks in ./hooks which will be triggered by the automated Docker build process.

The ansible-silo-base image needs to be built and uploaded manually. You can do this by running a command like:

The version of the base image is hardcoded in the Makefile. Update accordingly if you plan to release a new base image.

For testing purpose you can also manually build the ansible-silo image by running a command like:

Functional tests are implemented through bats. (0.4.0) After installing bats call:

Be aware, tests modify the Ansible version of your default ansible-silo volume!

We also validate URLs inside all files for positive results via awesome_bot (1.17.1). After installing awesome_bot call:

To run all tests call:

[View source for this page]